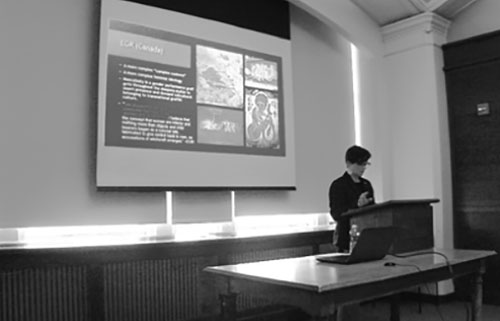 Jessica Pabón’s talk, “At One Point We All Rebelled”, takes place on the 5th floor of the Cathedral of Learning. Dozens of floor plans decorate the walls of the Gothic Revival room. The setting for a talk on graffiti and female masculinity is set.

Pabón investigates and presents the complexities of being a woman in the environment of graffiti and hip-hop. She introduces each of the graffiti grrlz she interacts with and brings the audience into a realm they may not have ever encountered. The individuality as well as anonymity of these women represents an interesting dynamic in her talk. These women’s purposeful and repetitive actions of ‘too much’ draw on the argument of woman writers engaging in a sense of female masculinity.

The classical aura of the room and the modern scope of the discussion was a pleasant juxtaposition. The ending period of Jessica Pabón’s talk included a time for questions and comments from the audience. They all were quite thought provoking though at times confusing. The one sentiment that remained in this discussion was that all these people were interested and willing to learn more on hip-hop, graffiti and gender dynamics foreshadowing a future rooted in understanding more of the various cultures that inhabit this world.